A training/information session was held on May 22nd at the Yabase Sports Park in Akita City. This session was to explain the rules, etiquette, and brief history of sumo. There was also instruction and practice on how to nakedly hit people as well. Attendance was not necessary for participation in the tournament — more than anything this was just a chance to have fun and a learn a bit about sumo. See the Facebook page for more info.

The Wrestlers for the 2011 Tournament were 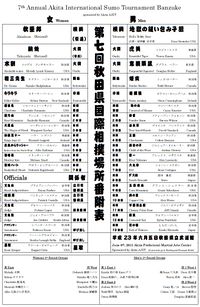 The officiating for the 2011 tournament, as well as special prize decisions was overseen by Sumo & Stogies.

For our 7th annual tournament, we had about 90 attendees, including rikishi, spectators, and volunteers. This event raised 91,375 yen. 40,000 yen was donated to volunteerAKITA's Fruit Tree Project, 30,000 yen was donated to Smile Kid's Tokoku Kids Project, and 21,375 yen was retained for community projects (funding this wiki and the '11/'12 Hanabi: Akita's Quarterly Magazine).

For a more detailed report including expenses, please email roomtoread.akitajet@gmail.com.