The 8th Annual Akita International Sumo Basho (第八回秋田県国際相撲場所) is a charity sumo tournament that was held on June 24th by the Akita Association of JETs. Every year JETs and friends gather from all across Tohoku (and some farther still) to decide who is worthy of the title of Akita's Yokozuna. Proceeds went to the Tohoku earthquake relief efforts. Over 90 people came to have a great time celebrating the fantastic aspect of Japanese culture that is sumo, as well as raise money for a great cause.

An optional training/information session was held June 16th at the Yabase Sports Park in Akita City. This session explained the rules, etiquette, and brief history of sumo to those who wanted to find out a bit more about the sport before participating in the real deal. Attendance was not necessary for participation in the tournament. 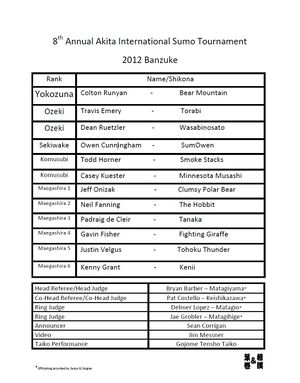 The original format was for each wrestler to fight 7 matches and the wrestlers with the best two records would fight each other for 1st and second place. After all 7 rounds had been completed, there was a 4-way tie for second place, with four wrestlers having 5-2 records. Single elimination matches were held to decide who would go against the sole 6-1 wrestler in the championship match.

The officiating for the 2012 tournament, as well as special prize decisions was overseen once again by the gentlemen of Sumo & Stogies.

The Akita Sakigake Newspaper once again came and covered the tournament. Below is the original text and translation of the article that appeared in the April 26th edition of the newpaper.

Prefectural International Sumo Tournament
12 ALTs Battle it out in Mawashis
Prefectural Martial Arts Center
Elementary, junior, and senior high school ALTs from around the prefecture gathered on the 24th at the prefectural martial arts center to watch some of their fellow ALTs fiercely battle it our in mawashi. The event was sponsored by the Akita Association of JETs.
Participants wrestled under shikona that they thought of themselves, such as "Bear Mountain" and "Minnesota Musashi." Burly wrestlers found themselves being cheered on by calls of "Nice fight!" as they brutally shoved opponents out of the ring and forced them off the dohyo.
Kenny Grant, a 23 year old from England currently living in Oga said, "It's fun to hit your opponent at full power"
The international sumo tournament has been held once a year since 2004 and aims to raise money for charity and promote cultural exchange. The money gathered from this year's tournament will go to the Red Cross to support the victims of the 2011 Great East Japan Earthquake. 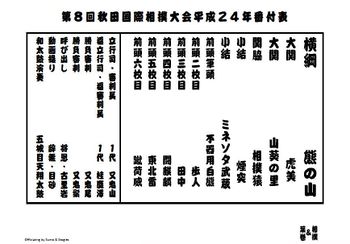