The 9th Annual Akita International Sumo Basho (第九回秋田県国際相撲場所) is a charity sumo tournament that was held on June 22nd by the Akita Association of JETs. Every year JETs and friends gather from all across Tohoku (and some farther still) to decide who was worthy of the title of Akita's Yokozuna.

The Men's tournament consisted of 12 men who were divided into 2 groups. After the initial 5 rounds the top 3 wrestlers from each group were assigned numbers from 1 through 6. These 6 men went through 3 rounds to decide the top 2 who then proceeded to the final.

The Women's tournament consisted of 5 women. The fights were broken into two sessions, with each wrestler fighting 2 fights per session. The two highest scoring wrestlers proceeded to the final.

The officiating for the 2013 tournament, as well as special prize decisions was overseen by past and present Akita JETs:

The Akita Sakigake Newspaper once again came and covered the tournament. Below is the original text and translation of the article that appeared in the June 23rd edition of the newpaper. 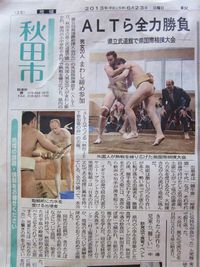 After the men's opening round Dean, with a perfect score of 5-0, and Doug and Todd with scores of 4-1, had secured their positions in the semi-finals. But with four men tied on a 3-2 record we needed to eliminate one, as only six could progress. It was decided that whoever lost two playoff bouts in a row will be eliminated. Janken was used to decide the first 2 fights, and the two losers would then fight each other.