The 12th Annual Akita International Sumo Basho (第十二回秋田県国際相撲場所) was a charity sumo tournament that was held on June 11th by the Akita Association of JETs. Every year JETs and friends gather from all across Tohoku (and some farther still) to decide who is worthy of the title of Akita's Yokozuna.

The Men's tournament consisted of 8 men who were divided into 2 groups. Each group wrestled in a round-robin format, and the top 2 from each group moved on to the semi-finals. Here, there was a 4 person round-robin with the top 2 advancing to the finals for a winner-take-all bout.

The Women's tournament consisted of only 4 women (6 signed up, but 2 women from Aomori cancelled the morning of the tournament). All wrestlers competed in a round-robin format, and the top 2 moved on to the final.

The officiating for the 2016 tournament, as well as special prize decisions was overseen by past and present Akita JETs:

This years event was well publicised with the Sakigake newspaper and ABS TV station covering the event. 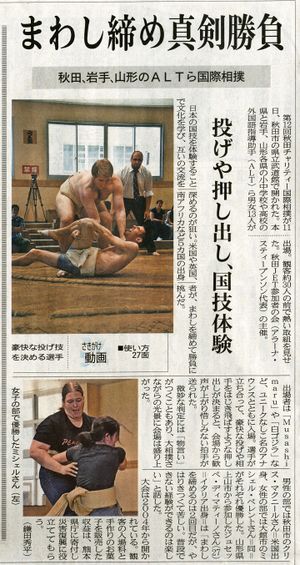 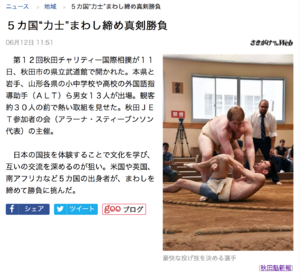