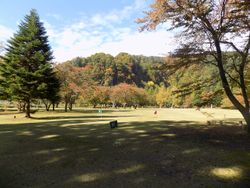 Ground Golf (グラウンドゴルフ) is a club and ball sport invented in Japan. It is very similar to Park Golf (パークゴルフ). It is based on the rules of traditional golf, but only requires one club and one ball per player. It is designed to be simple to play and low stress, making it popular with the elderly people of Japan. The name comes from the combination of ground, a Japanese word for park or campus, and golf. It is played from spring until fall.

Ground Golf follows the same rules as normal golf; the player sets their ball on the provided tee and tries to hit the ball into the corresponding gate/hole in the fewest number of strokes. The goal is to attempt to get the "par" score, which means the average score, or lower. Each hole is usually anywhere from 30 to 100 meters. Clubs come in plastic, metal, and wood varieties, and the balls resemble bocce balls.

If playing with multiple people, decide who goes first. Then after that, whoever is further from the goal gets to go until they are closer to the goal than the other players. At the start of a new hole, whoever scored lowest goes first and so on and so forth. The winner can be decided in two ways; match play, where each individual hole is one match and each win on a hole counts as a total, or stroke play, which is whoever had the lowest number of over all strokes wins.

While very easy to mix up sports, both Ground Golf and Park Golf are different games. They both have their similarities, as they both are based of normal golf, and their equipment can be used almost interchangeably, but they are different sports.

Ground golf is a lot more like mini-golf, in the sense that you play on mostly flat surfaces in straight lines. The courses wrap around each other and take up very little space, which explains why it is much more prevalent of the two. Also in ground golf your goal is to hit the ball into a small cage. The clubs are designed like putters, with a flat front and back.

Park Golf is more like real golf in the sense that it has longer holes. Each hole is designed with things like hills and sometimes even bunkers. Park golf courses as a result are not always straight lines, and use holes in the ground as the goal like real golf. These holes are much larger than normal golf holes. The club looks more like a real golf driver, with the clubs having a flat face while having a round back. In addition, due to the nature of course design, park golf has out of bounds. If your ball goes out of bounds, you return it to its last starting spot and add a one stroke penalty.

Ground Golf is a highly accessible sport; anyone can play it and the courses are spread out all around Akita. The equipment costs are very low compared to other sports, and you can play alone or with friends. Also, due to the nature of Ground Golf, it is usually set up in parks meaning it is often surrounded by scenic views making it relaxing and stress relieving. It is located in nearly every part of Akita, so it can be a good excuse to get outside.

Ground Golf is everywhere in Akita. You might have a course in your area!