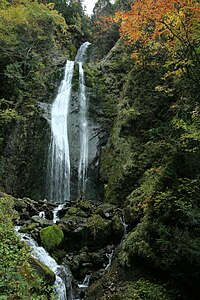 The falls at the end of the gorge

Dakigaeri gorge is situated at the midpoint of the Tamagawa River, which is a tributary to the larger Omono River. The gorge runs for roughly 10km in total, and is a popular destination for people around the country for leaf viewing during the fall.

The gorge gets its namesake from the extremely narrow and high path that runs along the gorge. Dakigaeri literally means to turn around while embracing someone. This comes from when two people would meet along the path, and to pass eachother one person would have to embrace the the other and move them to the other side.

Although the entire path is 10km in length, due to recent rock slides, the last 7 km of the path has been closed off. Even on the accessible sections of the gorge, rock slides do occur. At the end of the available path there is a fantastic waterfall with a viewing platform to take pictures from.

From Akita City: After taking Route 46, turn off on the Route 50, and you should see signs directing you towards the gorge.

Fall is the best time to visit the gorge because of the stunning scenery, although you should be aware that because of the close proximity to Kakunodate there will be quite a few tourist hikers during that time.