Japanese is a language spoken by over 140 million people in Japan and in Japanese emigrant communities around the world. It is related to the Ryukyuan languages, but there is no widely accepted evidence of a relationship with any other languages. It is an agglutinative language and is distinguished by a complex system of honorifics reflecting the hierarchical nature of Japanese society, with verb forms and particular vocabulary to indicate the relative status of speaker and listener. The sound inventory of Japanese is relatively small and has a lexically distinct pitch-accent system.

The Japanese language is written with a combination of three different types of scripts: Chinese characters called kanji (漢字 / かんじ), and two syllabic scripts made up of modified Chinese characters, hiragana (平仮名 / ひらがな) and katakana (片仮名 / カタカナ). The Latin alphabet, rōmaji (ローマ字), is also often used in modern Japanese, especially for company names and logos, advertising, and when inputting Japanese into a computer. Western style Arabic numerals are generally used for numbers, but traditional Sino-Japanese numerals are also commonplace. 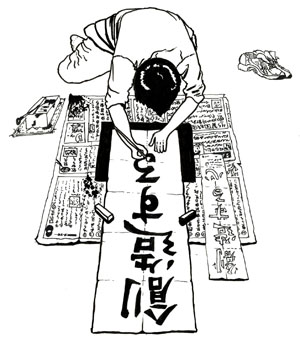