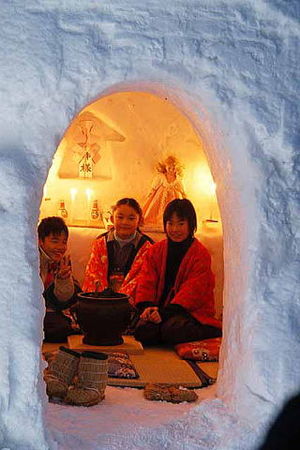 Children welcome tourists into a Kamakura at the Kamakura Festival.

Yokote Kamakura Festival (横手かまくら祭り yokote kamakura matsuri) is Yokote's most famous event. It is held annually from February 15-16th at various locations around the town.

The Kamakura Festival has been celebrated in Yokote for several hundred years. Originally, Kamakura were rectangular and had wooden roofs. Now, they are constructed entirely of snow and are more dome-like.

Each Kamakura is about 1.5 meters wide and 2 meters tall. They are constructed by piling snow and packing it down, then allowing it to freeze and harden over the course of about a week. The hardened mounds are then hollowed out to make a surprisingly roomy chamber.

The floors are covered with grass mats, so shoes must not be worn inside the Kamakura. Many Kamakuras are equipped with a single light bulb hanging from the ceiling to provide illumination. A charcoal brazier at the center of the Kamakura is used to grill mochi and heat amazake.

The back wall of the Kamakura is adorned with a shrine to the water god. In reverence to this god, meat and alcohol are not supposed to be consumed in the Kamakura, though this rule is often ignored.

Kamakura are on permanent display in the Kamakura Hall next to Yokote City Hall (map). They never melt because they are in a large walk-in freezer, kept at a constant temperature of -10°C. 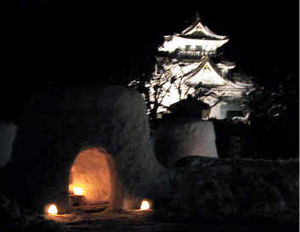 A view of a Kamakura near Yokote Castle.

There are over 100 Kamakura built every year throughout the city of Yokote. On the night of the event, a free bus transports tourists between the 4 main festival locations. The area around the Yokote City Hall is the main event area. It boasts dozens of Kamakura, snow sculptures, and food stalls.

Haguro-cho and Futaba-cho are the more historical Kamakura sites, having practiced the festival for hundreds of years.

The area around Yokote Castle is popular for its view. The area in front of the Yokote Minami Elementary School has hundreds of mini-kamakura. Students of the area schools construct them in the days leading up to the festival. Candles in the mini-kamakura give the winter night a cheerful glow. Students sometimes write wishes on pieces of paper and put them in their mini-kamakura.

Mini-kamakura also decorate the riverside near the bridge connecting downtown and Futaba-cho. 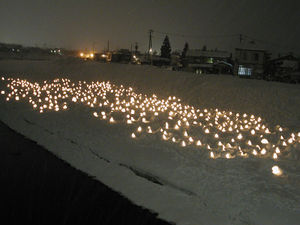