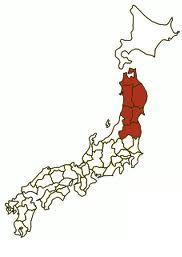 Location of Tohoku in Japan

Tohoku is the frozen north of Central Japan. Akita is located in Tohoku, and other Tohoku prefectures make great weekend destinations (especially on a 3-day weekend). Most places are accessible by train or car.

Tohoku Rokkonsai is a festival held in a different prefecture of Tohoku every summer. It was started in 2011 to rebuild spirits after the Great East Japan Earthquake. The main event is a parade featuring the "big six" festivals of Tohoku, one from each prefecture: Nebuta (Aomori), Kanto (Akita), Sansa Odori (Morioka, Iwate), Hanagasa (Yamagata), Sendai Tanabata (Sendai, Miyagi) and Waraji (Fukushima).