Aomori (青森県; -ken) is the prefecture directly to the north of Akita. It is in the Tohoku region of Japan.

〒038-2327 青森県西津軽郡深浦町大字舮作字下清滝15
A natural onsen resort built right into the west coast of Aomori. All of their baths face the Sea of Japan, and their outdoor mixed bath offers a great view of the sunset. If you stay overnight here, you can also explore the Shirakami Mountains and many of the other attractions in the area during the day.
☎ 0173-74-3500
Website (English)

Hachinohe (八戸) is a pretty lively city on the Pacific coast just above Iwate. There are plenty of things to do, things to eat, and places to see.

Hirosaki is one of the major cities closest to Akita. It takes about 30-40 minutes from Odate and accessible even during winter (no mountain roads to drive through). 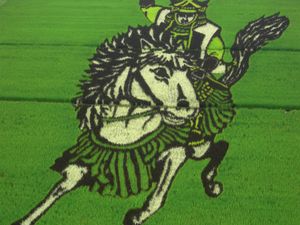