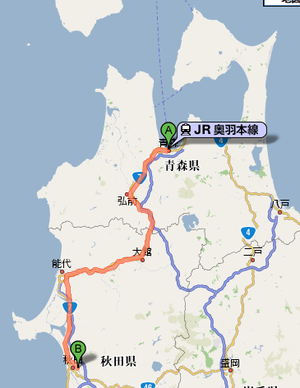 The Ou Main Line (奥羽本線) is a rail line which runs from Fukushima City, Fukushima prefecture, across Akita Prefecture, and ends at Aomori City, Aomori prefecture.

The entire line is under one name, but it actually operates in four separate segments.

Shinjo Station ~ Omagari Station This segment passes from Yamagata prefecture to Yuzawa, Yokote, Misato, and into Daisen. One train, either regular or express, will pass every hour or two.

Omagari Station ~ Akita Station The Akita Shinkansen also operates on this line and requires a wider rail gauge along this segment. Therefore, one will find three parallel rails along the tracks in this segment.