Yuzawa (湯沢市; -shi) is a city located in the Southeastern corner of Akita Prefecture bordering Yamagata, Iwate, and Miyagi Prefectures, with the Ou Mountain Range being the primary physical border.

Yuzawa City is a merger of four areas: Yuzawa City, Inakawa, Minase, and Ogachi. Yuzawa, like many cities in Akita, is primarily an agricultural town with some small businesses, several factories and sake breweries. Yuzawa as a whole is most famous for being the presumed home of the of the famous and beautiful Waka Poet, Ono no Komachi, Inaniwa Udon Noodles, its excellent onsen located in the Akinomiya and Minase regions, and Yuzawa City's Grand Tanabata Festival in earlier August. 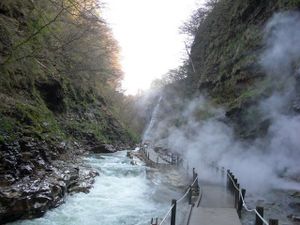 All of Yuzawa's main chain restaurants are located on Route 13, they are currently listed in order from North to South. With the exception of the Sukiya which is on 398.

There are many bars in Yuzawa but Pocket, Marvi, and Rosso are the Big 3 for the hip young crowd in Yuzawa. It must also be noted that the capacity for these bars goes in reverse order with Marvi having the most room and Rosso Corsa having the least.

As for snack bars, there are plenty of snack bars and a few hostess bars in Yuzawa, and they range from seedy to decent. If you're down ask some locals and they'll give you a recommendation depending on your tastes.

Insider information on the bars: If one came to Yuzawa for the night of their lives the night would follow as such: Bellami ----> Rosso ----> Marvi ----> Soir ----> Gangsta Izakaya ----> a place to sleep for the day. This functions as "The Yuzawa Special".

Bellami has a very interesting blend of food and drink and you can eat there for a decent price. The servers are all good people and you will certainly be treated well. Rosso is expensive; but, the beer is quality and the conversation is great. It should be the first place you go because you will want to remember what these beer taste like. Marvi comes third. Sakiko and Ayumi will take good care of you, feed you small snacks, and school you at darts; but, love talking to and hanging out with foreigners. Soir comes next. By this point, your inhibitions about singing in front of people should have been drowned in a pool of alcohol so the requests for random songs and the wonderful food served by Soir Mama (Satou-san) will not go un-appreciated. Finally, the Gangsta Izakaya ends your night for the cool down and the sunrise. Bonus points if you climb the hill behind Yuzawa to watch the sun as it rises.