Yurihonjō (由利本荘市; -shi) is a city located in Akita, Japan. This page is about the greater city. For individual towns, see Honjō, Iwaki, Chōkai, Higashiyuri, Nishime, Ouchi, Yashima and Yuri.

Yurihonjo was founded on 22nd March, 2005 when the former cities of Honjō and Iwaki, and the former towns of Chōkai, Higashiyuri, Nishime, Ouchi, Yashima and Yuri all merged together. After the merger, Yurihonjo became the largest municipality in Akita by area. 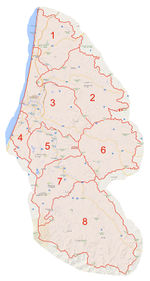 As Yurihonjo is comprised of numerous towns, each town has their own local events. For a more comprehensive list, please see Yurihonjo festivals. Some of the bigger events and festivals in Yurihonjo include:

Some good sightseeing spots in Yurihonjō are Honjō Park, Akata Giant Buddha, One Thousand Jizo, Hottai Falls, and Kofuen Sumo Ring. See the individual town pages for more. The imposing Mount Chōkai is Yurihonjo's most dominant geological feature, and can be climbed from a trailhead in Yashima.

Some of the more famous onsen in the city are Poporokko (in Ouchi), Minato no Yu (in Iwaki), and Tsurumai Onsen (by Honjo Park). See Yurihonjo onsen for an extensive listing of bath houses.

The Yurihonjō Board of Education is located in Nishime, and it is the main office for the city. There are branch offices in Yurihonjo's towns and villages.

Public buildings in Yurihonjo (including schools) have filtered internet. Certain words cannot appear in a page title (for example, girl, pink, and adult). If you browse to a blocked page, you will get the following error message: IWSSセキュリティイベント（in-proxy）. It is possible to circumvent the filters using https://proxify.com/, and though perhaps administrators would disapprove of this, so far none have.

Sport clubs available in the Yurohonjo area are: