Oga City (男鹿市; -shi) is a city in western Akita Prefecture located on the Oga Peninsula.

On August 5th, 1981, a policeman who was patrolling the coast discovered three men getting out of a rubber boat along Oga's Wakimoto Coast. The police managed to arrest one, while the other two managed to escape in the boat. The arrested man turned out to be an ethnic Korean born and raised in Japan, who had since turned covert operative for North Korea early in 1981. After traveling to North Korea for a month of training in July, the man was attempting to secretly return to Japan to begin his spy activities in earnest when he was caught. He had been tasked with preparing the way for other North Korean operatives and disseminating information about their political philosophy. This has since been known as the Oga Wakimoto Incident (男鹿脇本事件). 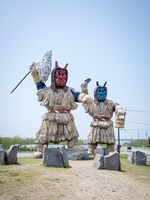 A museum dedicated to Oga's signature namahage festival. It features a video (in Japanese), a room of masks, and a corner where you can try putting on the Namahage outfit yourself. Next to the museum is the Oga Shinzan Folklore Museum, where performances of the Namahage ritual are held regularly. The Namahage Museum alone costs ¥540 per adult; a combined ticket costs ¥864. For more information, visit http://www.namahage.co.jp/namahagekan/english/ Open 08:30-17:00 365 days a year.

A beautiful shrine (or rather, a set of five shrines) overlooking the shore of Oga, located not far from the Godzilla Rock. Take the Monzen bus line out from Oga Station to the very end of the line,then walk to the Akagami Shrine (赤神神社), where the 999 Stone Stairs leading to the shrine begin. Located behind the shrine is the Shinzan Trail. Beware, however - the bus runs once every hour, if that.

(Japanese name not known) A mountain trail crossing over the Shinzan mountain, going from Goshado to the Namahage Museum. The view is incredible, but not this is not a trail for the faint of heart; it takes roughly four hours to cross and gets quite steep in places. Also, be aware that buses are uncommon at either end. 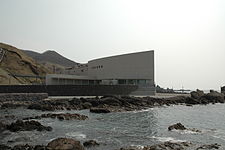 A small mountain which dominates the peninsula's skyline. At its peak is an observation tower, and the mountain is also host to a paragliding school that is open from March to December.