Happō (八峰町; -cho) is a town in northwest Akita Prefecture.

The town's name in Japanese is somewhat misleading. Although it literally means 8 peaks, the town does not have these geological features. This is because the name is taken from the first kanji of the two towns that it was formed from—Hachimori (八森) and Minehama (峰浜).

In 2001 a merger committee was formed with the purpose of merging the towns of Futatsui, Minehama, Hachiryu, Yamamoto, and Kotooka with Noshiro. In 2004 the committee recommended discarding the Noshiro name, and renaming the new city Shirakami, after the nearby world heritage site, Shirakami-sanchi. This proposal was strongly rejected by the mayor of 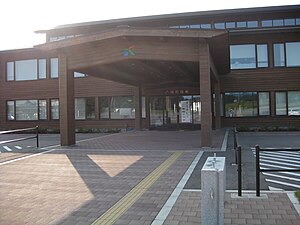 Fujisato. His reasoning was that Shirakami itself was originally an Aomori name, and much of the new town would not even be included in the protected area.

Following the rejection of the merger, a new merger committee was formed to join together the towns of just Minehama and Hachimori. Although the first two names that were proposed were "Minami Shirakami" and "Akita Shirakami," NPOs from Aomori strongly voiced their protest. The committee did not recognize that the protests influenced their decision, but eventually settled on "Happō," a name entirely unrelated to the World Heritage Site.