Ugo (羽後町; -machi) is a town in the south of Akita Prefecture.

During Japan's Meiji era the former Dewa province (出羽国) was realigned into two provinces. Ugo Province (羽後国), which contained some of the northern parts of Yamagata Prefecture as well as all of Akita prefecture, with the exception of Kosaka and Kazuno, and Uzen Province (羽前国), which contained the Majority of Yamagata. The small town of Ugo (羽後町) in Southern Akita is the only remaining municipality bearing the Meiji period name of Akita, although some prefecture-wide companies, parks, shrines, and stations still bear the name Ugo. Ugo is mainly a rice farming town with an estimated population of 17,351 and a density of 75.2 persons per km². The total area is 230.75 km². The town is located in the Ogachi Plain (雄勝野) which is bordered by the Dewa Mountains(出羽山脈) in the west, and the Ou mountains (奥羽山脈) in the East. Ugo, together with Higashinaruse, makes up part of Ogachi County (雄勝郡) (separate from both Yuzawa and Yokote,) although they both maintain their own municipal independence. Ugo is well known in Akita for the annual Bon Dance in Nishimonai. Obligatory "famous" local foods are watermelon, soba, and beef.

Ugo has no train station and is not on the freeway. From Daisen/Semboku/Yokote, you can take the expressway to Yuzawa, and then a right onto Route 398 will take you straight in. Or you can take Route 13 down and save yourself a few hundred yen. If you're coming from Yurihonjō you can enjoy mountains roads the whole way there. Take Route 7 to Route 107 for quite a while then right onto Route 398 at the statue of a man made with old tires, which will take you right into Nishimonai. From Akita City you can take the expressway, go through Honjō, or take Route 13 the whole way down (expressway recommended).

Buses are also available from Yuzawa to Ugo. Simply go to the bus stop in front of Yuzawa Station and take the bus headed to Motonishi Shogakkou (元西小学校) which passes through Miwa and Nishimonai before terminating at Motonishi (¥700 for the whole trip). There are also a few buses a day from Nishimonai to Sendo.

The Nishimonai Bon Odori (西馬音内盆踊り) is a dance held every year August 16-18. It is a symbolic dance to show proper respect and gratefulness to ones deceased ancestors. It is ranked as one of the top 3 bon dances in Japan.

This is how we get down in Ugo.

The dance began as a harvest dance in Nishimonai in about 1280. In 1601 the lord of Nishimonai burned his castle after a defeat and the people danced among the ruins to remember their lord. These 2 dances were merged in the late 1700's to form the dance's last incarnation, which, despite attempts to stop it in the early 1900's, continues to this day. It is the biggest festival of the year, drawing people from all over Tohoku. A poorly translated quote from Wikipedia informs us that Nishimonai's bon dance is one of three bon dances in Tohoku, all of which are "important intangible ethnic custom cultural assets."

The week before the festival all of the shops on the Bon Odori street open up and display the traditional Hanui (端縫) Patchwork Kimonos, the Amigasa (あみがさ) hats and the Hikosa Zukin (彦三頭巾) masks.

The shops and food stands open at around 5. The dance begins as the sun goes down and continues until about 11. Make sure to ask the local beer and sake vendors if they have any samples of homemade sake (濁酒; doboroku) and they are usually more than willing to share with foreigners.

The annual Yukitopia Festival (ゆきとぴあ七曲) takes places on the last Saturday and Sunday of January. A horse drawn carriage follows set course through Nishimonai, Motonishi, and all the way up the Nana Magari mountain road, crossing into Tashiro. The Road is lined with small lanterns made from snow. Very atmospheric, if a little bit boring.

After many long hours of brain storming and planning Ugo came up with an idea to boost the towns slowly dwindling revenue stream. What seemed like a last ditch hair-brained scheme more than a solid plan, from a financial point of view has has been paying off in the short term. Ugo hired several well known Japanese manga artists to design logos for various agricultural products, and local traditions/shops. 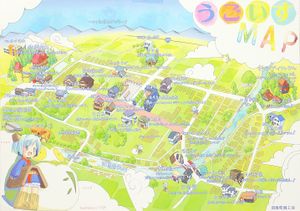 Hard to read map of Ugoisu.

It started with an illustration contest to decide who would design the logo on a bag of Ugo Akita Komachi. The contest brought thousands of people to Ugo in hopes of having their illustrations on a widely distributed agricultural product. After all of the submissions were in, the town decided to contract graphic novelist Aoi Nishimata (西又葵). After the initial success, illustrations were planned spread to posters and ads for the yearly Bon Odori, then shochu, strawberries, watermelon, and even freezer packs of Ugo Beef Curry. 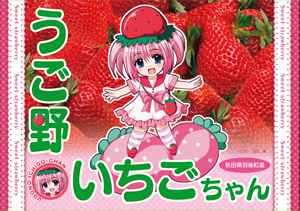 Ugo has seen significant economic upturn because of this campaign. The relative limited nature of these products has led to increased internet sales, shipping all over the country from Hokkaido to Okinawa, as well as an upturn in inter-prefecture tourism. The contribution from otaku all over Japan has given Ugo town the funds to finally renovate Ugo Junior High School which has been in desperate need of repairs for about a decade.

At some point the town had an illustrator create a fictional Ugo world called Ugoisu. The main mascot is a little girl named Kayatan whose outfit resembles Ugo's historic Suzuki home. She rides around town on Ugoisu, a large bush warbler (Ugo's town bird). You can even get an Ugoisu world map at Ugo's town hall.

Ugo is split into 7 distinct wards, all of which have their own economic and cultural specializations.

Don't expect any nationwide or even regional chains. However, there are plenty of good local places to eat.

Soba is the signature dish of Ugo.

Ugo has no real pubs or bars. There are a number of snack bars in town, if that's what you're into.