Kitaakita (北秋田市; -shi) is Akita Prefecture's second-largest city by area. Clockwise from the north, it shares a border with Odate and Kazuno in the north-east, Semboku in the south-east, Akita City and Kamikoani in the south-west, and Noshiro and Fujisato in the north-west.

Note: This page is about Kitaakita City the municipality as a whole. For detailed information on restaurants and entertainment in "downtown" Kitaakita, see: Takanosu!

The city was formed in March of 2005 with the consolidation of the four former towns, Takanosu Town (鷹巣町; -machi), Moriyoshi Town (森吉町; -machi), Ani Town (阿仁町; -machi), and Aikawa Town (合川町; -machi). Today, the names of the four former towns are frequently used without the -machi (町) suffix to identify the regions of Kitaakita, but are no longer independent towns in the political sense. Each of these regions are now sometimes referred to with the suffix -chiku (地区) instead. Alternatively the regions may continue to be referred to with their suffix -machi if the prefix Kyuu- (旧; former) is also added in front. Despite the merge, each of Kitaakita's four towns maintains a local atmosphere as well as their own festivals and charms.

As of April 2018, Kitaakita City has partnered with Hello Kitty. You can find all kinds of Hello Kitty-themed items and decorations around the city if you keep your eyes open. Visit the official Kitaakita City Hello Kitty homepage for more information.

Being located in the very center of northern Akita, Kitaakita serves as a hub for many modes of transportation.

Highways
Currently the Takanosu area serves as the southern terminus of the Akita Expressway (秋田自動車道). As of the completion of the March 2018 extension, the highway starts at Odate-Noshiro Airport, connects to Takanosu, and continues through Odate before reaching the Kosaka Junction (which connects with Hirosaki and Aomori to the north, and Morioka and Sendai to the south).


Eventually the expressway will be expanded west to connect with the Akita Expressway in Futatsui to offer service south to Akita City, Yurihonjo, and Yokote.

Buses in and around Kitaakita City are operated by Shuhoku Bus.

Fixed Route Bus
Shuhoku Bus offers several bus routes through Kitaakita City. Thee buses are easily distinguished by their distinctive green or red color. You can find more information on the Shuhoku Bus website (Japanese). Click 時刻表 (jikokuhyou) for times. The English timetable for the Takanosu ↔ Odate line can be found on this page.

They operate several buses per day on routes with high ridership:

They also operate one bus per day out to remote locations such as Hitachinai and the Moriyoshi Dam.

Express Bus
Shuhoku Bus also operates highway buses from and through Kitaakita. Of course you can find more information on their Highway Bus website (Japanese). These buses require a reservation unless otherwise noted.

This line connects Noshiro, Takanosu, and Odate with Tokyo. This is an overnight bus. You can pick this bus up from the Itoku Plaza at 9:30pm, arriving at Ikebukuro Station at 7:25am the following morning.

This line connects Odate, and Kazuno, with Morioka. Shuhoku Bus operates one bus every hour (14 per day) to and from Odate Station (reachable by fixed route bus from Takanosu Station). You don't need a reservation for this line.

Two buses per day depart Odate Station in the morning for Sendai. It might be difficult to arrive at Odate Station early enough if departing from Takanosu!

Maeda Minami Station on the Nairiku Line, which is said to resemble the station in the movie 君の名は (Kimi no na wa)

Takanosu is home to JR Takanosu station, which is a station on the JR Ou Line with service to Akita City and Hirosaki.


Takanosu is also the northern terminus of the Akita Nairiku Line. The Nairiku Line provides service south from Takanosu through all four of Kitaakita's towns, continuing into Semboku. It's headquarters is located at Aniai Station in Ani. It's southern terminus is Kakunodate, where one can transfer to the Komachi Shinkansen. 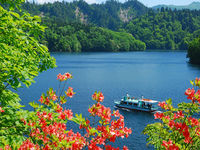 The Ferry on Lake Taihei.

Odate-Noshiro Airport, which is located in neither Odate nor Noshiro, can be found in Takanosu. Kitaakita Citizens affectionately call this airport "Akita North Airport." This airport operates two flights each to and from Tokyo Haneda Airport each day. Parking is free.

Kitaakita, being a landlocked municipality, cannot be reached by sea. It does, however, offer the Lake Taihei Ferry in Moriyoshi. It offers service to the other side of the lake, which is also in Moriyoshi. 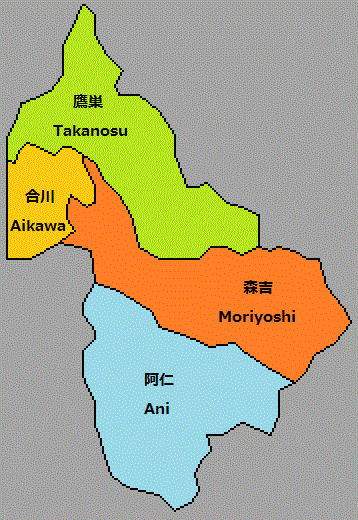 Click on a town to go to that town's page.

The focal town of the city with the local government offices, most businesses, and the connection train stations linking the Ou Line with the Nairiku Line.

The town which bears the name of the local mountain peak. It is separated into two primary areas: Yonaizawa (near Aikawa) and Maeda (near Ani).

The most mountainous and rugged town in the city. Also the largest in area, yet the least populous. Claims the southern half of Mt. Moriyoshi as well as waterfalls, hiking trails, and bears! It is also the home of Ani Ski Resort, the largest ski resort in Kitaakita. Ani is separated into two primary areas: Aniai in the north, and Ōani in the south.

Smallest in area, yet most densely populated town of the city. Set in southwestern Kitaakita with a public park and loads of rice fields.

This is an overview of the various festivals across Kitaakita City. For more detailed information on these festivals, please see the relevant towns' pages. 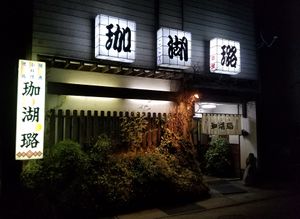 This izakaya is down the street from the large Family Mart, across from Banbai. This is one of the top watering holes in Takanosu. Their flagship menu item is their chicken karaage, however you won't leave dissatisfied with anything you order. In addition to the karaage they offer delicious sashimi, pickles, meat dishes, etc. all at reasonable prices. When in doubt, you can't go wrong with Kokoro. Good luck remembering how to write the kanji, though.
Address: 秋田県北秋田市住吉町5-24
Telephone: 0186-62-9926
Hours: 5:00pm ~ late 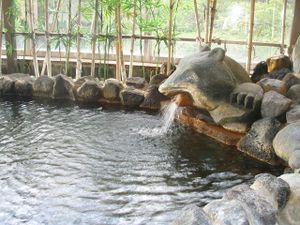 Affectionately known as the マタギの湯 ("Bear-hunting Onsen"), this onsen offers two indoor hot pools, with bubble jets in the floor. Additionally, there is a sauna and a cold water bath. The outdoor bath overlooks a nice valley of trees with a river running through the valley bed. Water flows from the mouths of stone bear heads. Soap and shampoo are provided. There are also two small private baths. These are reservable for ￥1000 for the first hour, and ￥500 for each additional half-hour.
If going by Nairikusen, get off at Ani Matagi Station - it's an unmanned station. If you call ahead of time, they will pick you up from the station for free. The latest drop-off back at Ani Matagi is 18:33 for customers bound for Takanosu, and 18:01 for customers bound for Kakunodate.
Address: 秋田県北秋田市阿仁打当字仙北渡道上67
Telephone: 0186-84-2612
Open: 9:00-22:00
Price: ¥400 (¥300 with same-day Ani Ski Resort lift ticket) 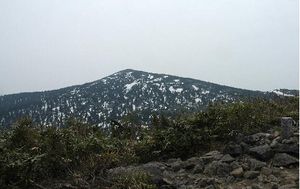 This mountain in Kitaakita, at 1,454 meters above sea level, is one of the highest points in northern Akita Prefecture. On a very clear day one can see as far as Ōdate, Noshiro, and the Sea of Japan from its peak. It was chosen as one of the 100 greatest flower mountains (花の百名山) because of the beauty of its alpine plants.
Ani Ski Resort is located on its south side. This ski resort is one of the best and most easily accessible ski resorts in Akita. The resort has two lifts and one gondola. The gondola allows access to the peak nearly year-round for sightseeing. In winter you can use it to ski/board, or to take theIce Monster Tour (Ice Monsters are a phenomenon which can only been seen on three mountains in all of Japan). A one-day pass at Ani is ￥3,300 and a four-hour pass is ￥2,500 for adults. If you want to take the gondola for mountain climbing or viewing the frozen trees, it is ￥1,500 roundtrip for adults. The resort includes a ski rental shop and cafe.

Kitaakita's brand-new public pool is located in Takanosu near Takanosu Elementary School. Above the pool is a small training room that has treadmills, recumbent bikes, and some specialized weight machines and a section with free weights. One-time admission to the training room is ¥200, while one-time admission to the pool is ¥500 (but this will allow you to also use the training room if you wish). You can also get a year-long membership for ¥20,000 to use both the pool and the training room.
Address: 秋田県北秋田市鷹巣字東中岱21-1
Telephone: 0186-62-5001
Hours: Open 7 days a week (excluding holidays) from 10am to 9pm.
Admission: ¥200 for gym, ¥510 for pool; or ¥20,000 for a year-long membership.

Community center with seminar rooms available for reservation. Also has public computers and Wi-Fi. There is free parking available. Open from 9:00am - 10:00pm.

The Bunkakaikan (Cultural Center) in Kitaakita, located next door to the Community Center listed above. This building has a large auditorium which hosts concerts and plays. It plays host to the Ōdate Kitaakita JHS Recitation and Speech Contest on alternating years. This building also contains the Takanosu Public Library on the second floor.
Address: 〒018-3311 秋田県北秋田市材木町2-3
Phone: 0186-62-3311 (Fax: 0186-62-2337) 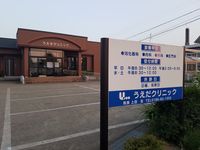 English Name: Japanese Beech
Japanese Name: 椈 (ブナ; buna)
Scientific Name: Fagus crenata
Description: This tree can reach heights of 35 meters with a rounded top that thrives in colder climates. You can see them widespread on Mt. Moriyoshi. Its seeds are small and in the shape of a three-pointed star. They are edible if you remove the shell - recommend roasting them first!

English Name: Hydrangea
Japanese Name: 紫陽花 (アジサイ; ajisai)
Scientific Name: Hydrangea macrophylla
Description: This blue flower is widely seen in Aikawa. Indeed it was the Aikawa Town Flower before the Kitaakita merger. The most impressive view of the Hydrangeas can be found in Hydrangea Park (in Aikawa)!

English Name: Black Woodpecker
Japanese Name: 熊啄木鳥 (クマゲラ; kumagera)
Scientific Name: Dryocopus martius
Description: This jet-black bird is distinguished by its red crown. It thrives in forested areas. It mainly feeds on ants and other tree-boring grubs. The holes it carves in trees are utilized by many other species as nesting areas, making this bird a cornerstone of the local ecology. 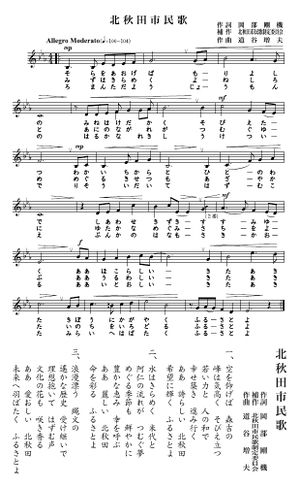 Sheet music for the City Song

ALTs and Their Schools