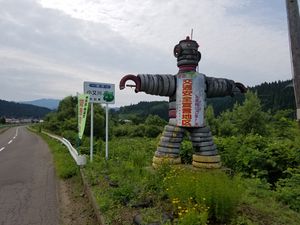 The man, the myth, the legend.

His background is shrouded in mystery. His origin is the stuff of legend; lost to the mists of time.

He watches over Moriyoshi with his silent, ever vigilant gaze. Some say he single-handedly carved from the mountains the plains upon which Maeda was built. Others claim he is a time travelling guardian who waits patiently for an ALT wielding the legendary sword Masamune to lead his army against the forces of evil.

Whatever his story may be, just don't try to ask him for directions. He is literally made of tires and can not answer you.