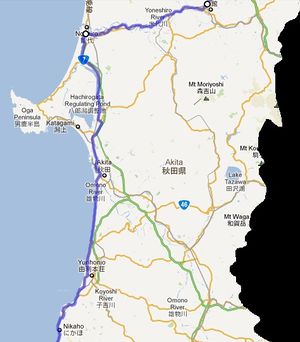 The 7 as it runs through Akita

National Route 7 (国道番号７) is an important National Highway in Tohoku stretching from Niigata City to Aomori City. The highway follows along the Sea of Japan for most of its route, except the last leg from Noshiro to Aomori City.

Through much of Yurihonjō, Route 7 runs parallel to portions of the Nihonkai Tohoku Expressway. This expressway is eventually supposed to work its way through Nikaho and parallel Route 7 there as well. The Akita Expressway also parallels Route 7 from northern Akita City to Futatsui. These expressways are much faster options to Route 7, which is usually a two-lane road frequented by K-trucks by day, and semi-trucks by night. Nevertheless, the expressways are toll roads which are extortionately expensive, so take your pick.

When traveling north from Akita City, Route 285 can be used to bypass Noshiro and Mitane on the way to Kitaakita, Odate, or Hirosaki. This route is a major artery, and is relatively well-plowed in the winter.