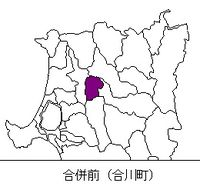 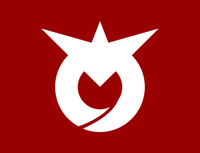 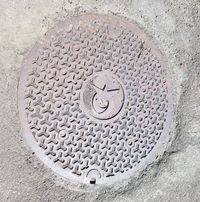 Aikawa (合川) is a district (地区; -chiku) in Kitaakita, Akita, Japan. Before the Kitaakita City merger, the area encompassed by Aikawa District used to be the autonomous municipality of Aikawa Town (町; -machi). In March 2005, Aikawa merged with Takanosu Town, Moriyoshi Town, and Ani Town to form Kitaakita City.

Just a short distance southwest of Takanosu in Kitaakita is the town of Aikawa. Aikawa, meaning 'join' and 'river,' has it's central hamlet located on the north banks of where the Ani River and Koani River converge. In the flood plains of these two rivers in Aikawa are fertile rice fields which make for beautiful views, particularly in autumn when the harvest has arrived and foliage has commenced. Aikawa's greatest claim to fame is its Hydrangea Festival, held in late July when the flowers are in full bloom. Indeed, the hydrangea is the symbol of town.

Aikawa is located in the western part of Kitaakita. Aikawa has an area of 112.80km², making it the smallest of the districts in Kitaakita by far. The population in 2005 was 7,550, giving the former town a population density of 66.93 persons per km², the highest of the four towns at the time.

This park, which contains Kitaakita Shimin Hospital is an expansive park with many recreational activities available. The park is designed to invoke a Scandinavian atmosphere.

This park is located uphill from Akita Refresh Academy and is home to wide swaths of hydrangeas. The park's keeper is said to have planted a hydrangea for each new child born in Aikawa until he ran out of space in the park.

This modern festival is celebrating its 7th consecutive year on May 28th, 2017. This festival is one of many which is sponsored by the Akita Nairiku Line and is easily accessible by train - just disembark at Aikawa Station and you're there! This festival features live music and dancing, as well as festival-standard food carts.
The biggest draw of this event is the butter mochi tossing event: festival staff toss butter mochi into the crowd while participants scramble to retrieve them. This is a playful, modern take on traditional mochi tossing, which itself has a long history in Japan as method of sharing happiness.

The hydrangea was the symbol of Aikawa Town before the 2005 merge, however the region is still known for the large blooming flowers. The exact date of the festival changes based on when the full bloom is expected, but it's usually held in late July.

The festival is held near Aikawa Junior High School in a large parking lot in front of the Aikawa Agricultural Community Center (合川農村環境改善センター) and the local hospital. It's near the river in Aikawa. The festival is a Shinto/Bhuddist fire cleansing ritual for the river and the surrounding rice fields. There's obon dancing, enka, taiko, drinking, yaki-soba, gakko galore, and all the other accouterments of the typical Japanese festival.

A very old and worn-down onsen close to the Odate-Noshiro Airport. Looks like a factory from the outside. Has a small changing room, many shower stalls, a normal-temperature bath, a high-temperature bath, and a small area outside enclosed by high walls with a small deep tub that wasn't even filled at the time of writing this. The water is intentionally a murky color. This onsen is straight out of the Shōwa Era. Not exactly recommended.
Address: 秋田県北秋田市上杉字金沢6-25
☎ 0186-78-5020
Hours: 8:30-21:00
Admission: Adults ¥300.

Yama-chan Ramen offers a great selection of various ramen, from a kimchi-infused bowl to a wonton dish. Their prices are pretty reasonable, ranging from about ¥550 to ¥750 for a bowl, and the bowls are a bit larger than at some of the chain ramen restaurants. A local couple owns and operates this shop, and they are extremely pleasant to speak to; they even allow you to change the TV channel should you request it.
As delicious as the food is, I don't recommend incorporating Yama-chan ramen into the middle of the Aikawa beer crawl, as the food is rather filling. If they are still open should you finish, however, by all means it is worth it.
Address: 秋田県北秋田市川井字鳥屋沢36-6
Telephone: 0186-78-3346

Right across the street from Yama-chan Ramen, this franchised conveyor-belt sushi is referred to as Monkey-King Sushi by the locals, and offers a good selection of cheap and delicious sushi. From seaweed rolls to hand pressed, the sushi chef is more than happy to make anything on the menu that hasn't passed by you already; actually, even if it has passed by he will make you a fresh one. Ask him to surprise you and you can experience a whole new style of sushi enjoyment. The plates are categorized by the sushi on them, and the prices are from ¥105 to about ¥400 for some of the specialty rolls. And with draft beers under ¥500 a glass, it's an excellent bargain.
Hours: This restaurant has closed down. Sorry!
Address: 秋田県北秋田市川井字才ノ神61
Telephone:

This is a yaki-niku restaurant in the center of downtown Aikawa. If you're looking for a vegetarian option, they sell Bibimbap as well, but it comes in a normal bowl instead of sizzling hot stoneware. Many students say Beko-chan in Takanosu is better.
Address: 秋田県北秋田市川井字才ノ神61

This a great little Western-style 'meat and tatties' restaurant in Aikawa, near the train station. If you're getting off the Akita_Nairiku_Line, go out of the station's front door and keep going straight. You'll pass a dentist's office on your left and shortly after that, there is a taxi company on your left. Before you get to taxi company's building, turn left and you'll see Hachiman-taro's white sign. It opened in February 2009 and serves Meji/Showa-era interpretations of Western food, mostly steaks, British-style curry, spiced stew, and some other tasty things.
Meat is the specialty here and all of it comes from the local area. Steaks here are very good and tender and not too bad for the price. ¥2,000 to ¥2,500 will get you a decently sized sirloin steak, salad, potato salad, and rice. Be warned that the owner cooks the steak to a 'rare' condition, so if you don't like bloody meat or pink flesh, then be sure and tell him to cook it a bit more. In addition to the regular steaks, they have a very good ハンバーグ (or what is usually referred to as a salisbury steak). The beef stew is also quite good and lean compared to most other interpretations of beef stew that I've had in Japan. The beef curry is rather good, too. The place serves a special water that comes from Tazawako - the name slips my mind. It's complimentary but I can't tell the difference between it and everyday tap water. If you want a decent priced steak, this is the place to go.
Address: 秋田県北秋田市新田目字大野55-1
Telephone:
Hours: This restaurant has unfortunately closed down.

An izakaya/lunch spot just opposite the train station exit in Aikawa. Looking out of the exit, go across the street and to your left and look for the Yebisu Beer flag. This place is owned by the Takeishi family and has a very reasonably priced and filling 定食 (ていしょく) that is ¥700—you can get this for dinner instead of shelling out a bunch of money for appetizers and side dishes. They also serve fresh turtle, beer, yaki-tori, sashimi, and lots of Chinese food. The beer is cheap and tasty and there are manga magazines galore to peruse.
Address: 秋田県北秋田市新田目字大野52-1
Telephone: 0186-78-5195

On the main street (near Yama-chan Ramen, on the opposite side) is located is the biggest supermarket in Aikawa. It sells almost everything one would need for daily living, including vegetables, fruit, meats and fish, Japanese pantry items, pre-made deli items, juice, alcohol, yogurts, bread, etc. Some of these items may cost a little more than what you'd get at Itoku or Big, but sometimes I prefer coming here because local farmers will sell their produce directly to this store, so you help the community. You can get pumpkins and spaghetti squash when they're in season for a great price. Sometimes the local cafe (Fumikirino Cafe) will sell their famous chiffon cake here too!
This supermarket now operates as a part of Family Mart, listed below.
Address: 秋田県北秋田市川井鳥屋沢２５
Telephone: 0186-78-4760
Hours: 9:30-20:00

At the intersection of the 24 and the 3 in Aikawa, you will find a neon-lit コンビニ (convenience store) called Lawson. This place has an excellent selection of late night snacks, including but not limited to Pizza-man, Curry-man, Teriyaki burgers, and Chiki-bunz. If you're in the mood for a drink, a decent variety of beverages will greet you, from Asahi Super-Dry to various sports drinks to Japan's famous green tea. The added bonus of Lawson's is that its location makes it a great starting and ending location for a コンビニ/bar crawl.
Address: 秋田県北秋田市川井字才ノ神54-1
Telephone: 0186-78-2963

This convenience store offers a better bread selection than the local Lawson's, and the prices for many other products are comparable. Family Mart is also a well placed stop along the Aikawa beer crawl.
(Information about the Sunkus in Aikawa, before it got rebranded as Family Mart: Pronounced "Sunks," this コンビニ gets its name from a combination of "Sun" and the Japanese pronunciation of the word "thanks." Its logo is indistinguishable as it spells out "SUNKUS," with the "K" looking like an elementary school child, stemming from "SUN" + "Kids" + "US.")
Address: 秋田県北秋田市川井鳥屋沢２５
Telephone: 0186-78-3372

Aikawa area has one junior high school, one elementary school, and one alternative school.

Aikawa area was also home to the following former schools.