Mt. Moriyoshi (森吉山;-zan) in Kitaakita, at 1,454 meters above sea level, is one of the highest points in northern Akita Prefecture. On a very clear day one can see as far as Ōdate, Noshiro, and even the Sea of Japan and Mt. Chōkai from its peak. Moriyoshi is a dormant volcano, and was chosen as one of the 100 greatest flower mountains (花の百名山) because of the beauty of its alpine plants. 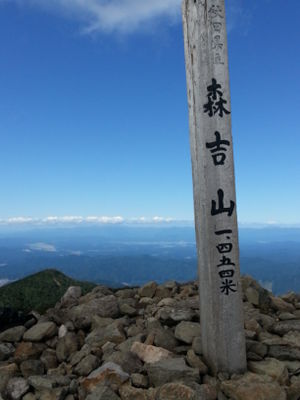 Although Moriyoshi is not included in the 100 Mountains of Japan, it is mentioned in the book. "Mt. Moriyoshi is a good mountain, but its lacking just a bit in height." Mt. Moriyoshi falls just 46m short of the 1500m requirement for inclusion.

Nevertheless, in spite of this shortcoming, Mt Moriyoshi has been included as one of the 100 Best Flower Mountains in Japan. In the warmer months, one can hike the mountain and enjoy a variety of alpine flowers and plants which grow only at high altitudes.

The locals of the area affectionately call this mountain, "Mt. Akita". Another name for the mountain is madarabeko, which means spotted cow in Akita-ben.

Prior to the merge of the local towns in 2005, the southern half of the mountain was part of Ani Town and the northern half was part of Moriyoshi Town.

In 2009 Mt. Moriyoshi was used for one of the scenes for the Korean Drama "IRIS," where one of the main characters has to tread across the barren winter wasteland that is Akita's mountains. 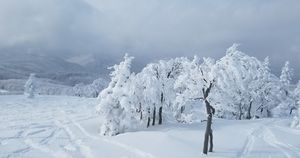 There are two ski resorts on Mt. Moriyoshi:

Currently, Moriyoshi Ski Resort is not operating. However, visitors can take the ski lift up the mountain in the off season for hiking. Peak times are in the summer (for wild flower viewing) from early May to late July, and in the fall (for autumn leaf viewing)throughout October. The gondola is open from 9am-4pm. A round trip ticket will cost you ¥1,800.

In the winter, the peak of Mt. Moriyoshi is a popular destination for viewing the "ice monsters" (soft rime frost; also called "snow monsters") of Akita. This frost is a meteorological phenomenon which causes ice to stick to the trees, creating an eerie appearance. The high humidity, coupled with low temperatures and low wind speed, are the conditions which allow this phenomenon to exist. The purity of the water in the precipitation causes it remain in liquid form, even below the freezing point, in an undisturbed state. The water crystalizes into ice immediately upon impact with any surface. Because the wind carries the water droplets vertically, the ice sticks predominantly to one side of the trees. If you look at the ice monsters close up, you can see the surface of the ice is jagged; as new ice keeps forming on top of old, any protrusions gradually get exaggerated into the "shrimp tail"-like appearance for which it is famous.

Although the peak of the mountain can be reached very easily using the Ani Gondola, Moriyoshi can also be climbed as a day trip. Because of the variety of the alpine plants on its slopes, Moriyoshi offers a different experience for hikers every month during spring, summer, and autumn.