If you incur a traffic violation, you can be issued a different color-type of ticket (切符; kippu). These will change depending on the severity of the violation (違反; ihan).

Yellow : Non-moving (e.g. parking) or traffic camera violation. If you've parked in an area clearly marked with a "no parking" symbol and especially if you leave your car unattended for any period of time, you might find a yellow ticket on your vehicle when you return. While traffic cameras are not common in Akita, they can be found more often in other prefectures or cities.

These tickets will require you to go to a police station ASAP where they'll issue you an appropriate colored ticket matching your violation. If the English states that you may be in violation and you may need to pay, operate under the assumption that you will have to pay.

This applies to rentals and leased vehicles as well, and the leasing or rental companies will work with police to track down unpaid tickets. 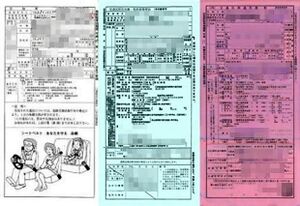 White : Minor traffic violations. These are usually safety related. They only incur 1 or 2 points on your record and typically no fines are issued. Seatbelt and helmet violations are under this category.

Blue : Serious traffic violation. Though technically considered a criminal violation, violators can be absolved of any serious criminal duties or penalties if fines are paid in a timely manner, usually within a week of receiving the fine notice at a convenience store. These will incur between 3-5 points on your driving record and will include violations such as speeding tickets and distracted driving (e.g. cell phone violation). Penalties can also include serving hours at traffic safety school (entirely in Japanese) on top of any fines to be paid.

Red : Major criminal violation. Getting one of these will have your license suspended immediately, will generally have heavy penalties attached and you'll be required to go to court for a trial hearing (be ready to lawyer up). Infractions include speeding over 30 kph and DUI. Penalties can include exorbitantly high fines, restitution, community service, and/or imprisonment.

Tickets can be paid either at the convenience store or by bank transfer (furikomi). You should pay these as soon as possible to avoid further penalties. 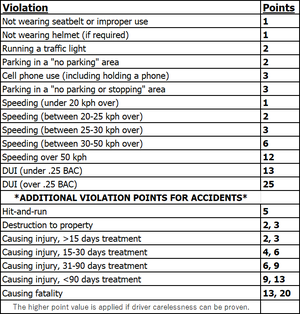 This is a quick reference chart of common traffic violations and demerit points.

Japan operates on a demerit points system. Everyone starts at 0 points and every traffic infraction will incur a certain amount of demerit points.

Points can stay on your license for 3 years or more depending on circumstances and if you've gotten any other traffic violations within that time frame.

As of December of 2019, due to the rise in cell phone related accidents, cell phone infractions have doubled in fines and points.

License suspensions can happen depending on the situation, but it will be on your permanent record.

At 15 points, your licensed can be revoked (or cancelled).

Throughout the year, Japan will have a "National Safety Week," in which police will be on the lookout for common traffic violations. They will occasionally will set up random checkpoints to make sure you're wearing your seatbelt, and they'll issue you a white ticket citation if you're not following traffic safety procedures. To avoid a citation, make sure everyone in the car has their seatbelts properly worn and fastened, including the driver and all front and back seat passengers. Any baby seats must also be properly mounted, secured, and fastened as well.

Of course, the police can cite you for a safety violation any time of the year as well.

It will not matter if you're calling someone, texting, checking or holding your phone as a GPS, police consider any device in your hand while driving as a cell phone violation. So if you need your phone as a GPS, get a phone holder or holster for your car. You also cannot be touching a mounted phone while you drive, so be careful. If you need to use your phone while driving, find a safe area to pull over (sometimes you'll find もしもしピット areas) and use your phone.

Even though we might see people driving erratically while watching their favorite comedy, it's more common for police to watch out for cell phone (or electronic device) usage while driving. Police have been cracking down on violations since 2019, and watch drivers and riders if they have any device in their hand while driving or riding their bike. They will also be on the side of the road watching passing vehicles as well.

These are considered one in the same in Japan. While Japan does indeed has a very very small BAC limit (about .015-.025), it is generally accepted that drinking any amount of alcohol, no matter how small, and getting pulled over will almost guarantee that you will be hit with a DUI charge.

Remember these two rules to avoid incurring a DUI charge:

Note that you will also get into legal trouble even if you are just a passenger in the car of a drunk driver, or if you are not in the car at all but you knowingly allowed someone who was drunk to get behind the wheel. For this reason, even the Japanese locals will not let you drive if you've had even a drop of alcohol in the same day, or if you get plastered the night before and need to drive somewhere early the next morning.

A DUI is a criminal infraction. In addition to all of the license trouble you will be in, you will also lose your job on the spot (drinking and driving is unacceptable conduct for public servants), and you will most likely face deportation. If you get sent home for drinking and driving, we'll miss you, but we won't feel sorry for you.

These are avoidable but common occurrence for many people in Akita. They are very expensive (significantly more so than an equivalent ticket in the United States) and quite a nuisance to deal with.

Often but not always, speed traps will be set up where a single police officer sits by the side of the road on a folding chair with a speed gun. Sometimes he will be partially hidden or in a position hard to see. If he tags you speeding he will call it in to the main speed trap down the road where all the police cars are set up visibly. There another officer will flag you over before you can pass by. Even if you reduce your speed when you see the police cars, it will be too late to avoid getting tagged. Avoid speeding at all times to avoid getting tagged by such a trap.

This chart for speeding penalties was compiled by former JETs from Aomori Prefecture in 2007 and may be outdated. Please use it as an estimation of the expected fine. The fines start at 10km over the stated limit, implying that if you drive within 10 km of the speed limit, the cops won't stop you. Then the speeding tickets start at ¥9,000, and go up by ¥3,000 in 5km increments.

The following table was taken from the Japanese website www.speedgo.com.

Driving without a license

To drive in Japan you need either:

An International Driving Permit is valid for either:

If you drive in Japan with an expired IDP, you will be charged with driving without a license (無免許運転; mumenkyo unten). Note that even if you renew your IDP, it will not be considered valid in Japan (you can never drive with an IDP after 1 year from date of entry into Japan). To "reset" the 1-year period of validity for IDPs, you have to be outside of Japan for a period of at least 3 months before reentering. Just going home for a week over the New Year's Holidays is not enough to reset your IDP validity! If you are caught driving with what appears to be a valid IDP but it has been over a year since your entry into Japan, you will get hit with the full extent of a driving without a license charge.

Although any form of speeding in Japan is technically against the law, it is a commonly accepted rule of the road that going less than 10km over the speed limit will be overlooked by the police. In many places, people regularly drive 20km over the limit ... but if the cops decide to bust you, tough luck. If you are caught going 30km over the speed limit, the punishment becomes quite drastic.

The line in the above chart for 30km is actually completely blank. You should expect to pay at least ¥60,000 (or perhaps much more). It gets worse — your license will probably be suspended for 1-30 days, and you will be required to attend a day or two of traffic safety school, which is both during working hours, necessitating the use of paid leave, and is also in a place that's hard to get to without a car. Possibly you may be prosecuted, which would necessitate a court hearing, and it's not unlikely that you'll have to visit the police station or prosecutor's office.

For 40-50km over the limit, you're looking at losing your license, possibly resigning from your work (public servants can't just break the law like this), and may have to leave the country. Technically, driving at such speeds becomes a crime in its own right: endangering the public.

Note that speeding fines and penalties vary depending on the type of road (local, toll road, residential, etc.).

International Driving Permit holders may not accrue points, but they will be fined and penalized reflecting their violation type. For example, if an IDP holder is caught speeding over 30kph, they will be issued a red ticket violation and all the penalties that accompany it. Note that while IDPs do not accrue points themselves, any violations you incur while driving with an IDP will make it that much more difficult to (or, in extreme cases, render you ineligible to) convert to a Japanese license. For example, if you commit a driving infraction that would otherwise carry with it a license suspension penalty, you will not be eligible to convert to a Japanese license during that license suspension period.

You'll see police often driving with their lights on, however it doesn't mean they're pulling you over. If they want to pull you over, they'll get on their radio and instruct you, specifically, to pull over to a safe area.

While in some countries, you may be able to talk your way out of a ticket, in Japan you're far less likely to be successful, regardless of your lack of Japanese. As a foreigner, you're still expected to fully follow the Japanese rules of the road and thus you may be subject to more scrutiny than usual. So it's generally a good idea to be courteous and give the police your full cooperation. Try not to escalate the situation, even if you think you were unfairly targeted. Fighting or saying the wrong things to the police can be used against you as it's your word against theirs, and the court usually sides with the police.

If you're being questioned by the police and you're not sure how to answer, ask for a translator, ask if you can contact someone, and if you want to be absolutely safe, get a lawyer (preferably one that you can communicate with).

But the best way to not deal with police is to simply not break the law.